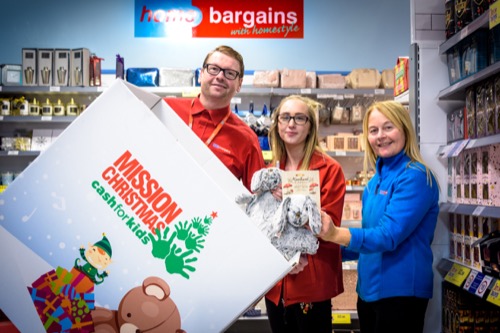 It’s mission complete for the charity appeal in Thornaby

Generous customers at Pavilion Shopping Centre have helped contribute towards 52,000 gifts that were donated to the Cash for Kids charity appeal, ‘Mission Christmas’.

Over the festive season, New Look, Wilko, Boots, Home Bargains and Thornaby Central Library at the centre invited customers to purchase an extra gift for a disadvantaged child, which resulted in nine gift bins packed full to the brim with goodies including stationery, toys, books, games and more.

Oliver Westley, centre manager at Pavilion, commented that the initiative had touched Thornaby’s heart and it had been wonderful to see the community getting behind the campaign. He said: “I don’t think there’s any one out there that could bear the thought of a child not being able to experience the magic and excitement of having something to open on Christmas morning.

“Our customers once again showed their generous spirit and I’d like to say a big ‘thank you’ to everyone who took part in Mission Christmas. This kindness meant that thousands of less fortunate children in our region woke up on 25 December with a huge smile on their face.”

The combined UK effort for the 2017 appeal raised more than £17.5 million and helped almost 400,000 children. Sharron Oxby, store manager at Wilko, said it had been an absolute pleasure to be involved.

She said: “We feel really proud of the people of Thornaby for making Mission Christmas such a brilliant success. It was really encouraging to see the gift bins filling up knowing the collection of items would go on to make the world of difference to many little lives.”

PIC CAP: From left – Steve Newton, Ebony Gale and Carol Meynell from Home Bargains, which was just one of the retailers at Pavilion Shopping Centre helping bring smiles to thousands of children in the North East as part of the Cash for Kids ‘Mission Christmas’ appeal.